Heroin use is never acceptable or safe by any means, but this doesn’t stop thousands of people from using the drug and falling victim to the dangerous consequences of substance abuse. This dangerous narcotic produces euphoric effects when smoked, injected or snorted and is responsible for thousands of deaths per year.

For some, just a single dose of heroin is enough to set off the urge to continue the high. This results in repeat use of the drug which is responsible for a rapid progression towards physical and psychological dependence on the drug. While heroin addiction is a potentially deadly disease, there is help available. Treatment and support methods exist to help those who abuse heroin to get their lives back on track.

Over the years, various treatment philosophies have emerged making heroin abuse no longer a life-long devastation that cannot be overcome. Those suffer from an addiction to this drug have an array of opportunities available to assist them in getting sober including:

What is Heroin Abuse?

Heroin is derived from the poppy plant and, much like other derivatives of this plant, is highly addictive. The drug is available in a powder or sticky substance that can be smoked, injected or snorted. Each method of use produces near immediate euphoric effects but injecting the drug is the most powerful and immediate means of getting high. Unfortunately, the rush that heroin provides to the body is quickly overcompensated for by an array of physical symptoms otherwise known as withdrawal.

According to the National Institute on Drug Abuse, a single use of heroin will lead to a mild tolerance to the drug. Repeat use will cause physical changes in the body that result in an increased desire to abusing the drug regardless of the consequences or dangers involved. Heroin abuse is not only dangerous, it’s a potentially deadly activity that can and often does lead to fatal consequences. 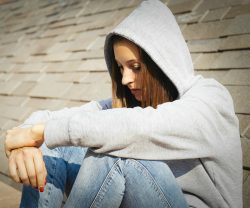 Heroin addicts distance themselves from loved ones.

According to the University of Wisconsin Health Services, people who abuse heroin will often lack color in their skin, they may look sticky or pale in color. They often look sick or otherwise like they are flushed. The cheeks no longer have a rosy color and there is clamminess to the overall texture of the skin.

Heroin use has a number of immediate effects on the user including:

As the drug is continuously abused it can have the following effects on the user:

Repeat use of heroin is responsible for physical dependence that causes the body to react in various negative ways when the drug is abruptly reduced or removed from the user’s daily regime. According to the University of Maryland Medical Center, heroin withdrawal directly refers to the array of symptoms that a user will have when he or she stops taking the drug after physical dependence has already set in. This is often referred to as, “dopesick” by the user because he or she will continue to feel sick until the drug is used or the detoxification process has had time to run its course.

Symptoms of heroin withdrawal include:

Heroin withdrawal symptoms are usually referred to by user’s as, “the worst thing I’ve ever felt,” but they are not usually life-threatening. Most people will only experience the major discomforts of heroin withdrawal for a period of 3-7 days as long as they don’t relapse and resort back to their previous patterns of drug use.

Heroin abuse often takes over the user’s life simply because he or she doesn’t want to cope with symptoms of withdrawal. Sometimes fear prevents the user from quitting, other times it’s the already well known discomfort that the user is attempting to avoid at all cost. Detoxification is the first step of getting help for heroin addiction, but it certainly is not the only step that a user should take.

According to Harvard Health, there is no single method of detox that has been proven to work for each user. Some respond well to synthetic opiates such as Methadone that can be used to reduce cravings and minimize withdrawal symptoms, others respond better to supportive care and drugs such as clonidine which help to shorten the withdrawal period.

Regardless of the method of treatment used in heroin detox, the overall goal is to reduce symptoms of withdrawal and stabilize the patient in preparation for treatment. Fortunately, symptoms are likely to subside on their own within a few days so many users are able to get through the withdrawal process with mere medical support and care.

If you or someone you love is struggling with an addiction to heroin, there’s no need to lose hope or feel helpless. Fortunately, many different types of treatment have evolved to help people who are addicted to heroin. Methadone maintenance programs, buprenorphine, naloxone, and other medications are widely used and accepted in the treatment field as a means of assisting patients with the process of heroin withdrawal and in overcoming the addiction.

The most common methods of treatment for heroin addiction today are:

While the road to recovery from heroin addiction will likely be a long and challenging journey, it will be equally rewarding. With each day of sobriety that you achieve, you’ll feel like that “old life” the life of being a heroin user, will gradually be slipping away. Unfortunately, like other diseases, heroin addiction is a disease marked by chronic relapse and a continued need for support and care.

If you do relapse, it’s important to pick up the pieces and try to get back on track to recovery where you left off. It can be difficult at times, and you may feel like you want to give up hope, but you have family, friends, counselors, therapists and peers who support your decision to get sober and who will help you along the way. Never let relapse get in the way of your recovery from this terrible disease.