Parents, school teachers, medical professionals and law enforcement are quick to show concern when it comes to the use of illicit drugs such as cocaine, heroin or prescription painkillers, but they often overlook dangers that exist right in their own homes. Cleaning products, paints, aerosols and similar chemicals are lurking in our cabinets, bathrooms and garages lending way to a whole new possibility of intoxication for children, teens and drug abusing adults. Inhalant abuse, though a concern in the household that is commonly overlooked, can be just as dangerous and potentially deadly as the use of any other illicit drug found on the streets. 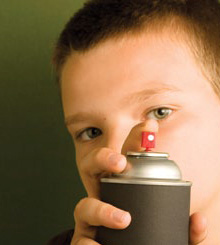 It’s important to know what household items may be used at inhalants.

Around the home, there are literally hundreds of different, everyday products that could be toxic to your children and teens. Who would have thought that whipped cream could be dangerous?

The following inhalants are likely lurking around your home, in your garage, in your refrigerator, underneath your kitchen sink or in your bathrooms:

Each of these seemingly harmless items has the potential to be inhaled to produce powerful effects that can lead to deadly consequences.

According to the National Institute on Drug Abuse, “inhalants are volatile substances that produce chemical vapors that can be inhaled to induce a psychoactive, or mind-altering, effect.” The term, “inhalants” is used to describe any fluid, chemical or substance that can only be used to get high by way of inhalation. Chemicals such as paint thinners, gas, spray paint and even hair spray or deodorant can all pose significant dangers to your children if they are inhaled. Generally, inhalants fall into one of the following categories:

How Prominent is Inhalant Abuse?

A recent survey called the National Survey on Drug Use and Health, found that nearly 1 million people aged 12 and older had abused an inhalant for the first time in the preceding year. The majority of those who admitted were under the age of 18 at the time. Children and teens are at the greatest risk for inhalant abuse, because these chemicals are often the easiest for them to get their hands on when they are just thinking about trying drugs out for the first time. Unfortunately, the greatest use of inhalants is consistently reported amongst 8th grade students. Reports show that nearly 10% of all 8th graders report having abused inhalants at least once in the preceding 12 months. Peak age for inhalant abuse—14 years old!

How are Inhalants Abused?

These drugs are sniffed from a container or they are inhaled through a bag or by another means. Using some simple household items, such as a rag, a paper bag, a plastic bag or a balloon, household items can become household dangers for kids and teens. According to the Center for Substance Abuse Research, “inhalants are sniffed directly from an open container or “huffed” from a rag soaked in the substance and held to the face.” The rag that has been soaked in the fluid or substance can also be placed inside a bag and then the bag repeatedly breathed in and out. This concentrates the vapors causing a stronger dose of the dangerous toxins to reach the brain more quickly than by any other method of inhalant abuse.

Children often mistakenly think that it’s “safe” to inhale nitrous oxide from a balloon or to take in the helium that comes from a standard floating party favor. Unfortunately, a single inhalation of either of these gasses could prove to be fatal for the user—the only real way of knowing if the repercussion is going to be fatal is to do it—and children are not afraid to take the plunge. Most don’t realize the dangers associated with using this or other drugs.

Many potential side effects can be felt, and serious dangers ensued when inhalants are abused. The immediate effects of these substances will appear within a few seconds and can last up to an hour. According to the Upstate New York Poison Center, the immediate effects of inhalants include a tingling sensation that results from an immediate lack of oxygen to the brain. Dangers include:

According to the Connecticut Poison Control Center, “inhalant is called “the silent epidemic” because most people do not know about the dangers of inhalants and abuse often goes unnoticed.” Early detection and recognition of the signs of inhalant abuse can help you to determine whether someone you love may need professional treatment and supportive care. The following signs of inhalant abuse may be seen in a teen or an adult who is abusing these types of substances:

What to Do if Someone is Abusing Inhalants

If you suspect that someone you know may be abusing inhalants, it’s important to seek prompt help in order to avoid serious consequences. Continued use, repeat use or any such use of harmful inhalants is not only dangerous—the outcome could be deadly. It’s important to talk with your children and teens about the dangers of inhaling any substance—even helium can lead to deadly heart attack or stroke if it is inhaled—even in small amounts. If you think someone you love is abusing inhalants:

Medical assessment is necessary if you suspect that your child or teen is using inhalants. According to the American Academy of Pediatrics, 74% of 4th graders actually wanted their parents to talk more openly to them about drugs—this number decreases significantly by 8th grade. Take the opportunity to talk with your children about inhalant abuse early on, while they are ready and willing to listen. You may save his or her life.