Heroin is processed from morphine which is naturally found as a primary alkaloid in the opium poppy plant. It’s nothing new to try and disguise sales and trades of heroin by using other names to obscure transactions between users, dealers, and distributors to deter detection of law enforcement. Heroin is a totally illegal drug, classified by the DEA as Schedule I substance that has a high abuse potential, no acceptable medical purpose, and a lack of safety when used.

Since heroin’s debut in the 19th century as a drug far more potent than morphine in many of its effects, it has accumulated a long list of street names and the lists continue to grow. Street names for heroin and the slang terms for ways in which it is abused continue to be devised and re-devised for easy recognition by the common abuser while being inconspicuous to those who would discourage its use.

With the passing of the Harrison Narcotics Act in 1914 to curb drug abuse and addiction and the 1923 ban on legal narcotic sales by the U.S. Treasury Department’s Narcotics Division, opioid addicts turned to illegal heroin supplies on the street which were mainly supplied by China. The drug came in a powdery white substance form, hence the name “China White”.

Over time, lucrative black market sales for heroin continued to thrive around the world with additive substances and processes of heroin that made it available in the forms of brown powder, called “Brown Sugar” and a black tarry substance known as “Mexican Mud” or “Black Tar Heroin”, which according to the DEA, is a main form of heroin found on the streets today.

Heroin is a dangerous drug. If you or a loved one needs help overcoming heroin addiction, call us toll free today at 800-487-1890 (Who Answers?) . 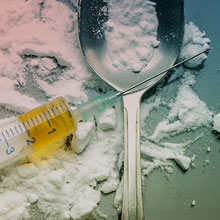 Throughout the years, street names for heroin have been shortened or changed in various subcultures and geographical areas to relate to the potency of the drug and its various effects, textures, tastes, colors, smells, and combinations of use with other substances. Trends, locations, and popular songs with code words for heroin give rise to the ongoing lists.

Depending on the morphine content originating in the opium, how the drug is processed, and the variant substances added to increase its volume for sales, heroin potencies are dangerously unpredictable and some names portray its negative aspects.

The most commonly recognized street names for heroin include:

As heroin trafficking from Mexico continues to gain popularity in the southwest and moves across the nation, Spanish street names for heroin have also increased its easy recognition among the common heroin users. Among others the names include:

Heroin is generally distributed in packages of paper which are called “bindles”, in “nickel bags” at a cost of $5, other “bags” at various costs, and in “balloons” where the heroin packed in a balloon can be easily swallowed to be trafficked inside humans or to deter detection of possession whenever contact with law enforcement may be possible. The dangers of overdose are well documented for those who swallow the “balloons” only to have them erupt or leak within the digestive track from the acidity in the stomach before they are expelled.

Large amounts of heroin packed in “kilos” make their way across various borders to be broken down into “Z’s” or ounces for further distributions. “Riders” are 5 kilograms of heroin that are sometimes provided at no cost in large cocaine imports from Columbia.

Street Slang for Heroin Use

According to the NIDA, “After an intravenous injection of heroin, users report feeling a surge of euphoria (“rush”) as heroin immediately reaches the brain. Other street slang for heroin use or to describe someone using heroin include:

Heroin is often combined with different drugs to enhance or alter the dosage effects and users create special names for these mixtures including:

Combining heroin with other drugs may increase the risk of overdose. Call 800-487-1890 (Who Answers?) for help quitting heroin today.