Far more potent than the heroin of the past, heroin has become an epidemic threat to society. The true effects of a heroin overdose go far beyond what can immediately be seen with unknown variants and processing methods that create an unpredictable combination of dangerous effects. Heroin overdose treatment and recovery helps survivors who suffer those consequences that run deep in their ability to live normal, healthy, and satisfying lives.

The World Health Organization, identifies a heroin overdose as a combination of three signs and symptoms referred to as the “opioid overdose triad” including:

As a central nervous system depressant, heroin acts quickly in the brain to depress breathing and heart rate. The often overlooked signs that a person is experiencing a heroin overdose including pinpoint pupils, “nodding off”, and/ or extremely decreased cognitive and motor skills tend to become part of the heroin abuse scene and raise attractions to the drug for its potency. For many, it’s not until the person stops breathing altogether or becomes unable to be roused that the emergency of the situation sets in. 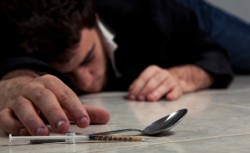 One of the first lines of defense in treating a heroin overdose is the use of an opioid antagonist drug known as naloxone. According to the DEA 2014 National Drug Threat Assessment, since 2001, over 10,000 overdose reversals had been successfully achieved by using naloxone which displaces the heroin from the opioid receptors in the brain and central nervous system.

Establishing sufficient breathing and heartbeat are critical. Although breathing and cardiovascular failures are quick to take a life, the lack of oxygen supplies in the blood can lead to an untimely death later. Cerebral hypoxia or brain damage, cardiovascular and pulmonary problems, pneumonia, and overwhelmingly negative psychological issues are examples of conditions a heroin overdose survivor may face.

Emergency medical personnel should be notified immediately to supply medical stabilization services. According to the NIDA, “Naloxone that can be used by nonmedical personnel has been shown to be cost-effective and save lives.” Ideally, ventilation with 100% oxygen should be given prior to the naloxone administration to prevent acute lung injury.

Dependency to heroin often leads to relapse immediately after an overdose survival regardless of the consequences. A wide range of psychological stress can go along with cravings and other triggers with feelings of guilt or shame that can leave a person feeling hopeless. Their first instinct may be to use heroin again, but, their loss of tolerance after treatment puts them more at risk for another overdose.

An effective recovery requires a comprehensive approach to treat medical and psychiatric conditions along with substance abuse counseling, behavioral therapies, and possibly a medication assistance using methadone or buprenorphine to promote long-term abstinence. The use of medications to improve health and social functioning in heroin dependents has proven to promote significant success when used along with other supportive treatment approaches. Without help, the chances of relapse, and ultimately, survival are grim.