Drinking is a social event throughout the world that is widely accepted and equally misunderstood. For some, moderate social drinking never amounts to anything more than mere fun, but for others, a few drinks can quickly turn into a potentially dangerous condition known as alcohol abuse. Although in itself alcohol abuse is not generally deadly, the consequences of overdrinking or repeat binges on alcohol will quickly become all too clear for some. 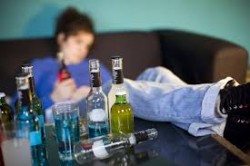 Abuse of alcohol leads to many health-related and personal problems.

What is it that makes some people quickly become addicted to alcohol while others can causally drink on occasion without ever suffering any major consequences from their behaviors? Why do some become alcoholics while others can stop at any given time without any major repercussions? Alcoholism, and alcohol abuse for that matter, are often the byproduct of genetic predisposition, social interactions, mental stability and individual circumstances beyond our control.

What is Alcohol Abuse?

According to Medline Plus, a service of the U.S. National Library of Medicine, alcohol abuse is a situation that involves drinking which leads to problems at work, school, home, in personal relationships, with the law or otherwise. People who abuse alcohol are not necessarily addicted to alcohol, they do not suffer from symptoms of withdrawal when they quit drinking, but there are legitimate consequences that result from their decisions to over consume alcoholic beverages.

What is Alcoholism or Alcohol Addiction?

Unlike alcohol abuse, people who suffer from alcoholism or alcohol addiction are dependent on the alcohol. They crave alcohol, they feel sick or otherwise out of control without alcohol, and when they have it they cannot control the amount of alcohol that they consume. Most people who are addicted with:

Do I Have a Drinking Problem?

According to the CDC, if drinking alcohol has led to any consequences or problems in your life, then you may have a drinking problem. You may have a problem with alcohol abuse if:

If you suspect that someone you know may be abusing alcohol, what can you do to help? The first step is to be fully aware of the common signs of alcohol abuse; they are:

Denial and How it Affects Your Ability to Quit Drinking

Unfortunately, denial is a major player in the role of quitting and in getting help. According to the University of Utah Health Services, denial is often the result of, “enabling by others.” This occurs when loved ones or family members drink with the individual and make it seem like maters are alright; in all actuality, there is a problem brewing and the person needs help.

Denial will reinforce an addict’s refusal to acknowledge that there is a problem and this in turn will lead to a lack of desire to cut back or quit—it’s the old, “if it’s not broke, why fix it,” routine. Here’s how to tell that someone you love is in denial about a drinking problem:

How Alcohol Abuse Effects Your Life

Your life can literally be ruined in a matter of minutes as a result of the decision to abuse alcohol. Misuse, such as drinking and driving, is responsible for 88,000 deaths annually according to the CDC. IN addition to the potentially deadly consequences that can arise from alcohol abuse, alcohol has the following effects on your life:

Getting Help for Alcohol Abuse

If someone you care about may have a drinking problem, it’s important that you don’t let your emotions cloud your judgment. Alcohol abuse and alcoholism can be so overwhelming that the problem just sits on a back burner, untouched and potentially refrained from consideration until it becomes so severe that there’s no possible way to turn a cold cheek and look the other way. Helping someone who is abusing alcohol begins with:

The first step to helping someone who is addicted to alcohol or who has a drinking problem is to help them to admit that they need help. This process can be very challenging, especially when denial is a key factor. If you cannot seem to break through to the individual, you may consider seeking the professionally qualified help of a trained interventionist to assist you.

According to the U.S. Department of Health and Human Services, “getting a loved one to agree to accept help, and finding support services for all family members are the first steps toward healing for the addicted person and the entire family. Reluctance is often a problem in the attempt to get help, with proper support and encouragement, most will find their way into treatment.