Cocaine is a powerful sedative that evokes euphoric effects when it is injected, smoked, snorted or otherwise consumed. The substance immediately affects the brain causing increased energy, alertness and talkativeness. Unfortunately, cocaine abuse can lead to increased tolerance and dependence which requires professional treatment in order to fully recover.

How is Cocaine Abused? 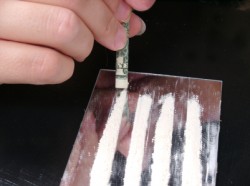 Cocaine is often taken many times in one drug episode.

According to the Medical University of South Carolina, “cocaine use ranges from occasional use to repeated or compulsive use, with a variety of patterns in between.” Unfortunately, there is no method of cocaine use or abuse that is considered safe as this drug is not accepted for any medical or recreational use purpose by the Food and Drug Administration. As such, cocaine is always dangerous and any such use is considered abuse.

Cocaine is used in the following manners:

Each method of abuse has similar effects but the transmission can determine the potency of the drug. For instance, when cocaine is injected the effects are almost immediate and they are much more pronounced than when it is eaten. However, regardless of method of use, cocaine’s powerful effects are highly dangerous to the health of the user.

According to the Center for Substance Abuse Research, cocaine has the following immediate effects which can last anywhere from a few minutes to a couple of hours:

Long Term Effects of Cocaine Abuse on the User

People who regularly abuse cocaine are at increased risk of a number of long term health effects. Snorting the drug through the nose regularly can cause infections, sinus damage, nose bleeds and similar problems. Injecting the drug regularly can lead to STDs or disease contracted through shared or dirty needles, infections, abrasions and scarring. Smoking cocaine will cause damage to the lungs.

When cocaine is repeatedly used, the risk for dependence to develop is greatly increased. While cocaine addiction is not characterized by strong physical withdrawal symptoms, the psychological toll that this drug takes on the user is very strong and can cause an array of complications. According to the Canadian Journal of Physiology and Pharmacology, “although the biological consequences of repeated cocaine self-administration on the central nervous system function are poorly understood, preliminary findings suggest that intravenous cocaine self-administration may decrease neural functioning in this brain reward system.”

Findings suggest that cocaine addiction does exist and that it can be both difficult to treat and difficult to overcome without professional help. Unfortunately, there are no medications that can be used in the treatment of cocaine addiction, so users are left to cope with symptoms of withdrawal and to seek counseling, support and therapy if they are in need of help overcoming the physical and psychological stronghold that this powerful stimulant has when it is repeatedly abused.

Cocaine addiction produces a cyclic variation of substance abuse with patterns generally characterized by a roller coaster effect of binging on the drug followed by a lack of drug use. Most users will take repeat doses of cocaine for hours or even days at a time followed by heavy periods of sleep and inactivity. Eventually, the addiction creates such a powerful stronghold full of cravings and desire to use that the individual has fewer periods in between of inactivity and longer binges.

Cocaine is powerfully addictive, by its very nature, it causes dependence and increased tolerance after just a few repeat doses. Early recognition of the signs of cocaine addiction can help you to determine whether there is a legitimate problem and if help is necessary. According to Brown University, some of the signs of cocaine addiction include:

If you or someone you know is showing any of the above signs of cocaine addiction, there is help available—a simple phone call to a referral specialist will have you on your way to getting the right care and support to help you overcome this terrible disease. Cocaine addiction doesn’t have to be a ruling factor in your life.

Because cocaine has the power to cause physical and psychological elements of dependence, the drug has an equal ability to cause the body to suffer symptoms of withdrawal when it is not used. Cocaine withdrawal is characterized by the following symptoms:

While withdrawal symptoms from cocaine can often be treated with simple medications such as anti-anxiety drugs or depression medications, most of these symptoms are better treated using a series of psychological therapies. Treatment focuses on the psychological elements of cocaine addiction because there are few physical elements associated with the dependence. As such, the most common methods of treatment for cocaine addiction include:

Cognitive Behavioral Therapy, or CBT, is an effective approach for helping cocaine addicts to learn how to instill abstinence into their lives and to avoid relapse. This behavioral therapy focuses on helping the user to recognize the triggers that cause their drug use and to either;

CBT, according to the National Institute on Drug Abuse, “is also noteworthy because of its compatibility with a range of other treatments patients may receive.” This treatment is often combined with support, individual counseling, group counseling and other programs to provide the patient with a fully rounded treatment experience that is most conducive to recovery.

Because users who become addicted to cocaine are likely to be negatively affected by the damage to their reward system and cannot experience happiness or contentment the way that they used to, motivational incentives provide a strong balance that helps in the treatment of cocaine abuse and addiction. This behavioral therapy focuses on rewarding patients for abstinence or for meeting treatment goals. Motivational incentives may include vouchers for: