When someone is abusing meth, they will likely try to hide it from their friends and loved ones, becoming very secretive. However, there are still many common signs that they will likely exhibit as a result of abusing meth. If you notice consistently these signs in someone you care about, it may be necessary to seek treatment for them as “repeated methamphetamine use can easily lead to addiction––a chronic, relapsing disease characterized by compulsive drug seeking and use” (NIDA). 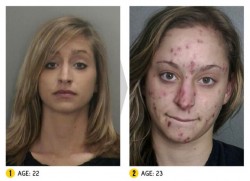 The physical signs of meth abuse can be startling.

There are many telltale physical signs of meth abuse. According to the NIDA, “increased respiration” and rapid heartbeat are all common when an individual is high on meth. Some of the other physical signs that may occur as a result of meth abuse are as follows:

Over time, meth abuse can lead to even more physical effects that will be noticeable by others. These are:

There are a large number of behavioral signs associated with meth abuse. A person who is abusing meth will not act like themselves and will likely do things to put themselves and other people in danger in order to abuse more meth. According to CESAR, “The most dangerous stage of methamphetamine abuse occurs when an abuser has not slept in 3-15 days and is irritable and paranoid.” This behavior is what is known as tweaking and is associated with:

Other behavioral signs of meth abuse are:

The telltale signs of meth abuse are very clear. If you are concerned about a loved one and think that they may be abusing meth, look for these signs and seek treatment for them as soon as possible.