As stated by the NIDA Teen, “Methamphetamine use can quickly lead to addiction.” While some drugs may take a long time to cause an intense addiction syndrome to develop, methamphetamine can rapidly become addictive as a result of its tendency to cause continuous abuse (even for several days straight) and the fact that it is often smoked or injected, two methods that are liable to cause fast-onset addiction.

The effects of crystal meth addiction are dangerous and often long-term. While the drug can cause an euphoric high that may last for 12 hours or more (much longer than that of most other drugs), it can also leave behind physical and psychological effects that are extremely harmful to the user. And those who become addicted after chronic use will be likely to experience the intense effects below, endangering themselves more as they continue to abuse the drug.

Tolerance is one of the common effects of crystal meth addiction; in fact, these two issues tend to fuel one another. According to the NIDA, “Abusers often need to take higher doses of the drug, take it more frequently, or change how they take it in an effort to get the desired effect.” This more intense abuse of the drug will lead to an even stronger desire for it, reinforcing the addiction. “Chronic methamphetamine abusers may  [also] develop difficulty feeling any pleasure other than that provided by the drug.”

Addiction and dependence occur almost simultaneously when it comes to methamphetamine abuse. Those who crave the drug and abuse it compulsively will not feel normal unless they are on it. This issue can often lead to the behavior called tweaking, where the user may continue abusing meth for over than a week (even two) in order to prolong their high.

In addition, those who become dependent on the drug also experience withdrawal symptoms when they stop taking it (another reason why they may try to prolong their high). Methamphetamine withdrawal is intense and similar to the syndrome caused by cocaine abuse and addiction. The syndrome is largely psychological and includes these symptoms:

Methamphetamine addiction actually causes many physical side effects that are often noticeable to others. For example, a side effect called meth mouth develops over time as a result of the uncontrolled jaw clenching meth abuse can cause and the tendency addicts have to eat sugary foods as opposed to healthy ones. The teeth become broken and cracked and the gums diseased.

Meth addicts also show signs of skin problems such as sores, acne, and infections. This is caused by the intense amount of scratching that these individuals are likely to inflict on themselves. Weight loss is also an severe issue, as many addicts do not eat because of the appetite suppression that meth causes, leaving them extremely malnourished. Because of these physical effects, it can be very easy for an outsider to spot the signs of meth addiction in someone close to them.

Other physical effects caused by meth addiction include:

“Brain damage similar to Parkinson’s or Alzheimer’s diseases,” according to CESAR, is also a common side effect of long-term abuse of crystal meth. Many individuals experience issues with memory and emotion as a result of other structural changes to the brain. As stated by the NIH, “Questions remain about whether these effects of methamphetamine abuse on the human brain are permanent, and whether these effects can predispose some people to develop neurodegenerative diseases later in life.”

Paranoia, anxiety, and aggression are all common reactions during immediate methamphetamine abuse, but these can become much more intense and long-lasting for someone who is addicted to the drug. This psychological condition can become so severe in fact that a person’s behavior will begin to resemble that of schizophrenic individuals’, causing hallucinations as well as severe paranoia. Addicts can become incredibly violent, even homicidal, and should be approached with extreme caution as a result.

Individuals who abuse the drug chronically are also likely to engage in dangerous activities including those which could get them arrested or killed and risky sexual behaviors which may cause them to contract HIV or hepatitis. When a person is tweaking especially, their behavior may not seem irrational or dangerous at first, but it is important to notice their fast moving eyes and jerky movements in order to recognize their condition.

The actions of a person addicted to crystal meth are often dangerous to others as well as the individuals themselves, which is why inpatient rehab or hospitalization is especially necessary at the beginning of addiction treatment. 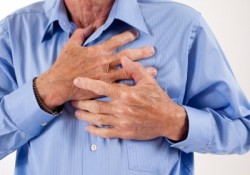 Another of the more likely effects of crystal meth addiction is overdose. Users may experience seizures, stroke, heart attack, and other results when abusing the drug often and in high doses. Both an acute and a chronic meth overdose can be fatal, and anyone who displays the signs of one of these conditions should be treated immediately. According to the NLM, some of these signs include

A person who becomes addicted to methamphetamine will often experience a breakdown of their entire life. Meth addicts will only want to abuse the drug, leading to a general apathy about everything else from work to school to relationships. Often, friends and family members cannot watch while their loved ones continue to abuse the drug, as it causes so many harmful effects.

Meth addicts are more likely to spend all of their money on the drug and get arrested for buying or selling it or doing something illegal in order to obtain more. Methamphetamine addiction can ruin a person’s life, and sadly, they will not be able to stop even then.

The effects of crystal meth addiction are vast as addiction is a disease that is almost impossible to fight on one’s own. And with the chronic abuse of a drug as powerful as methamphetamine, the results are extremely harmful to the individual and everyone around them.