Methamphetamine is considered one of the more dangerous commonly abused illegal drugs. Both the short and long term effects of its use can be incredibly harmful (physically and psychologically). Someone who has been using meth for a short time (or is considering doing so) should understand that taking the drug even once can lead to deadly overdose and that chronic abuse can cause the development of psychological disorders, physical health issues, and even irreparable brain damage.

As stated by the NLM, “Meth at first causes a rush of good feelings” but will soon turn on the individuals who use it. And no matter how long they do so, there will be the potential for harmful side effects.

According to the NIDA, “As a powerful stimulant, methamphetamine, even in small doses can increase wakefulness and physical activity and decrease appetite.” While these may seem like desirable effects, meth users are actually more likely to take the drug because they want to feel its strong, euphoric high. When meth enters a person’s system, it will very quickly cause the release of a large amount of dopamine, a neurotransmitter in the brain which “is involved in motivation, the experience of pleasure, and motor function.” 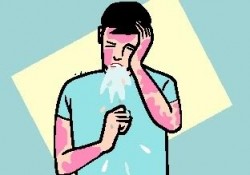 Short term effects of meth abuse include nausea and vomiting.

Other short term effects caused by methamphetamine include:

For most individuals who abuse the drug, the experience may start out pleasurable and then become frightening and intense. Issues like paranoia and aggression can come on quickly and the person’s euphoric high can sour just as fast. Physically, the short term (or immediate) effects of methamphetamine are disquieting: the body will become extremely tense and alert (leading to the uncontrollable jaw clenching), and the individual’s vital signs will increase dramatically.

Behavior during this time can range from happy to aggressive and become extremely unpredictable. As stated by CESAR, “Performing repetitive, meaningless tasks” is very common for someone who is high on methamphetamine. In addition, the drug can also become incredibly dangerous when abused in high doses. A person could experience a seizure, an extremely high body temperature that actually makes them pass out, a heart attack, or a stroke, all of which can become deadly if the individual is not properly cared for right away.

When a person begins to abuse meth chronically, many of the short term effects will become even worse. Behavioral issues like paranoia can become severe and lead to other problems while the physical side effects produced by the drug will worsen dramatically.

Tolerance will also form with long term abuse, causing the individual to need higher doses of the drug each time in order to feel the same effects. Long term abuse of meth makes a person even more likely to experience severe and even permanent effects from the drug.

Other long term effects of meth include:

Methamphetamine erodes a person physically and psychologically. When someone has been abusing the drug for several years, they often experience “severe structural and functional changes in areas of the brain associated with emotion and memory, which may account for many of the emotional and cognitive problems observed in chronic methamphetamine abusers.” Unfortunately, these effects have been shown to take over a year to subside and, sometimes, even longer.

A person is more likely to engage in risky behavior as a result of long term methamphetamine abuse, and the drug can cause birth defects like cleft palate and cardiac defects as well as premature births when abused during pregnancy. There is also a much higher risk for users who inject the drug of contracting “HIV, hepatitis B and C, and other blood-borne viruses” (DOJ). The risk of overdose and death becomes even higher as well, as users are constantly taking more and more of the drug each time.

The possible effects of methamphetamine can be extremely dangerous no matter how long an individual has been taking the drug. Still, the longer someone abuses meth, the more likely they are to be unable to stop. If you have been using methamphetamine, even in the short term, you should consider attending treatment in order to help you stop once and for all.