What are the Health Effects of Marijuana Abuse?

Like when using many substances, marijuana use has the potential to become marijuana abuse. Any drug when used excessively can have serious health side effects. Marijuana is no different. According to the National Institute on Drug Abuse, marijuana overuse leads to physical and psychological health complications including risks associated with withdrawal.

Marijuana has a variety of physical effects. Abusing marijuana intensifies these effects and can become problematic. Doctors categorize these issues into short-term and long-term categories. 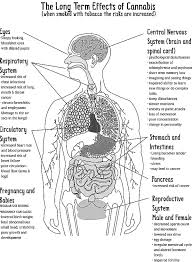 Marijuana contributes to a number of health problems.

Abusing marijuana can lead to the following effects:

The Centers for Disease Control warns that the storage of marijuana by-products in fat cells may cause additional damage. The severity of the damage is an unknown factor associated with marijuana use.

The Psychological Effects of Overusing Marijuana

Psychological effects of marijuana abuse can lead to cognitive impairment as well as other short and long-term effects.

The short-term psychological effects are:

There is some debate whether marijuana abuse causes an increased risk for schizophrenia. Studies show that although there is a correlation between early marijuana abuse and early onset of schizophrenia, they are not conclusive. The medical and scientific communities are continuing to study this issue.

People who chronically abuse marijuana often suffer from withdrawal when they stop using it. The symptoms of withdrawal are similar to the symptoms of alcohol withdrawal and are sometimes very severe. Withdrawal can cause shortness of breath, severe anxiety, an increase in blood pressure, and psychotic episodes. A patient may experience all, a few, or none of these symptoms. The severity of the symptoms is often related to the length of use. A short-term user typically experiences fewer withdrawal symptoms than a long-term user.

Research of the length and severity of the health risks associated with abusing marijuana is still ongoing. According to current studies by the National Center for Biotechnology Information, the risk of marijuana abuse disorders is increasing due to increased potency and usage. The medical and scientific communities are taking an interest in the health risks and benefits in short-term and long-term marijuana use. For now, doctors and scientists agree that overusing marijuana leads to a variety of serious health effects.