Tramadol first appeared on the U.S. Market in 1995 and since then, it has become a preferred prescription pain reliever by doctors and other medical professionals who have concerns with prescribing an opioid pain reliever to certain patients. However, Tramadol has the potential to cause addiction like other opioids although it has a weaker effect on opioid receptors. 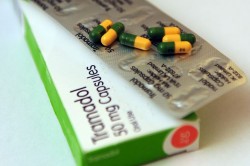 Tramadol is an effective pain reliever.

The analgesic effects of Tramadol are effective in relieving moderate to moderately severe pain because it is an opioid agonist that binds to the mu opioid receptors in the brain, but, it also works as a serotonin/norepinephrine reuptake inhibitor (SNRI) to be effective against nerve pain, which is typical of anti-depressants.

Effective in August, 2014, Tramadol has been placed on the DEA’s Schedule IV as an opiate narcotic. Controversy over its opioid status was displaced by the DEA citing the Controlled Substances Act definition of opiates which states that an opiate is “any drug or other substance having an addiction-forming or addiction-sustaining liability similar to morphine or being capable of conversion into a drug having such addiction-forming or addiction-sustaining liability.”

Scientific evidence shows that opioids reinforce behaviors of addiction because they increase dopamine activity in the brain. Although it has a relatively low reinforcing action compared to other opioids, regular use of Tramadol can be habit-forming and lead to physical or psychological health problems as well as maladaptive behaviors to continue its use.

According to the National Institute on Drug Abuse, “Addiction is a chronic, often relapsing brain disease that causes compulsive drug seeking and use, despite harmful consequences to the addicted individual and to those around him or her.”

2) Tolerance or the need to use more Tramadol to achieve the desired effects.

3) Dependence where the person needs to use Tramadol regularly to feel a sense of “normalcy” and be able to function, otherwise they suffer withdrawals from lack of Tramadol in their system.

5) Denial or minimizing the amounts or frequencies of Tramadol use.

6) Unexplainable lack of money due to purchasing Tramadol on the street.

8) Running out of Tramadol before prescription is scheduled to end.

9) Changing friends or behaviors to be able to use or abuse Tramadol more frequently.

10) Loss of interest in family, important activities or obligations due to Tramadol use.