Home › Adderall Abuse › Signs You Have an Addiction to Adderall

Signs You Have an Addiction to Adderall

According to the NIDA for Teens, “Taking someone else’s prescription drugs or taking the drugs to get ‘high’ can have serious health risks,” chief among them being the development of compulsive use. While Adderall is a beneficial medication that helps many individuals with ADHD focus and be more productive in work and school, taking it in a way different than prescribed (even if it was originally your medication) is extremely dangerous. Adderall is a stimulant and, therefore, may cause addiction when abused. If you think you may be addicted to Adderall, look for the signs listed below.

Three of the main signs of addiction are cravings, tolerance, and dependence. When an individual begins to abuse a drug like Adderall, it starts to change the way they think and feel about everything, especially the drug. As stated by the NIDA, “When taken in doses and via routes other than those prescribed, prescription stimulants can increase brain dopamine in a rapid and highly amplified manner (similar to other drugs of abuse such as methamphetamine), thereby disrupting normal communication between brain cells and producing euphoria, and, as a result, increasing the risk of addiction.”

These changes also occur as a result of frequent and intense dopamine release and usually are the precursors to a full-blown addiction.

If you answered yes to these questions, it a strong sign that you already have an Adderall addiction.

As the NIDA states, “Stimulants can increase blood pressure, heart rate, and body temperature and decrease sleep and appetite.” Over time, these changes in your body’s functions will begin to create intense, problematic side effects. For example, many individuals who become addicted to Adderall experience severe weight loss as a result of their constantly suppressed appetite and sleeplessness. This can lead to malnutrition as well as other problematic physical conditions. 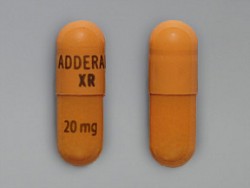 Adderall addiction can cause constant dizziness and skin disorder.

Other signs that you might be addicted to Adderall can include:

If you have begun to experience many of these physical symptoms and signs, it is likely that you are already addicted to the prescription drug. However, if you have noticed these issues before and refused to stop abusing Adderall, it is even more likely that your drug abuse has become compulsive.

Those who notice that their physical or mental health (or other aspects of their lives) are being affected by their constant drug use and refuse to seek treatment are addicted. This is because they hold the drug in a higher regard than all other aspects of their life and are unconcerned about the problematic or dangerous consequences its use is causing.

Some individuals do try to stop abusing Adderall and realize that they cannot. They relapse because the withdrawal symptoms are too intense or they make excuses for themselves to continue. If you have realized that your use of Adderall has gone beyond your control, you are already addicted to the drug.

Adderall also causes a number of other strange and disturbing behaviors. Many individuals who abuse the drug in the long-term will notice that they experience intense paranoia, anxiety, aggression, and hostility, even when they are not currently intoxicated. In some cases, these effects can lead to a type of psychosis that “is characterized by violent and erratic behavior” as well as suicidal and homicidal thoughts, hallucinations, and delusions (CESAR). Noticing that your behavior and mental state is changing as a result of your Adderall abuse is not only a sign of addiction but of a dangerous psychosis for which you will need treatment immediately.

Other behavioral signs of Adderall addiction include:

This kind of behavior clearly shows that your life has become all about the drug. When you begin to care about nothing else (not even your own health or safety), your drug abuse has become compulsive and you will need to seek treatment right away.

Other Signs of an Adderall Addiction

When abused over a long period of time, Adderall doesn’t stop at affecting your health. It can affect every aspect of your life as well. Addicted individuals often realize too late that the drug is causing problems in their lives that will take years to recover from (and sometimes, these cannot even be repaired).

If your Adderall use has caused one of the major problems below to occur in your life in the past year, you are more than likely addicted to the drug.

The signs above clearly paint a picture of someone who needs addiction treatment for Adderall abuse. If you feel that it is clear you are struggling with many of the same problems, seek treatment now and make a positive change that can help set your life right––or even save it.