There are many issues that have been linked to marijuana use and abuse, but a recent study has shown that regular marijuana use can actually be linked to impairments in the brain’s reward center. Because of marijuana use, many people have problems feeling positive effects and are sometimes more affected by negative effects and stimuli like stress. A new study is helping us understand why. 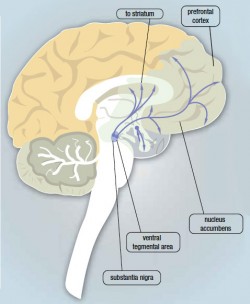 How Marijuana Effects the Brain and Its Chemicals

When an individual smokes marijuana, the drug is absorbed and affects the brain more quickly than when it is ingested another way. The THC chemical in marijuana reacts with cannabinoid receptors that are in the brain. According to the NIDA, the endocannabinoid system (of which cannabinoid receptors are a part) “plays an important role in normal brain development and function.”

The NIDA goes on to state that “the highest density of cannabinoid receptors is found in parts of the brain that influence pleasure, memory, thinking, concentration, sensory and time perception, and coordinated movement.” Because “marijuana overactivates the endocannabinoid system,” issues may begin to occur here as a result of marijuana use.

Marijuana’s Effect on the Brain’s Response to Dopamine

While marijuana can provide someone with a temporary high, there are also issues with the way regular marijuana use changes brain functions, actually making a person more tense and less able to experience positive emotions.

Dopamine is a chemical which is, among its other functions, involved in the brain’s reward system. It is a natural chemical that human beings need for many functions. Unfortunately, new research states that “regular marijuana users show impairments in the brain’s ability to respond to dopamine” (NIDA). Because dopamine has many functions in the human body, this is a major issue that may occur due to the overuse of marijuana. It also explains many of the other issues that individuals have when they smoke marijuana regularly, which could be very important to our knowledge of marijuana use.

Psychological Effects of Marijuana Use

According to the NIDA, “regular marijuana users are more prone towards depression, anxiety, irritability, and increased sensitivity to stress” (NIDA 2). We were unable to understand exactly why these issues occurred before, but now that we are beginning to understand marijuana’s effects on the brain’s response to dopamine, the reason for the link is becoming clearer.

The study itself states that “marijuana abusers show lower positive and higher negative emotionality scores than controls” which connects to the lower amount of sensitivity to rewards and the higher amount of reactions to stress that have been associated with regular marijuana use (PNAS). This research is not entirely conclusive as it

but there does seem to be a link between the two issues. The low reaction to dopamine that many regular marijuana users exhibit does help to explain the increase in stress sensitivity and irritability and decrease in reward sensitivity. Further research will be needed to make these findings clearer, but we now understand that regular marijuana users do show a significant impairment in their brains’ reactiveness to dopamine.