Home › NDP Leaders Considering Massachusetts as a Model for Future

NDP Leaders Considering Massachusetts as a Model for Future

The recent work done in Massachusetts, led by Gov. Deval Patrick, is making the National Drug Policy leaders pay attention to the state’s substance abuse policies. They are even considering the state to be a model for the future of NDP on a federal level. Because of the new ideas, laws, and practices being put forth in Massachusetts, we now have a new possible way to help more people struggling with substance abuse to receive treatment. 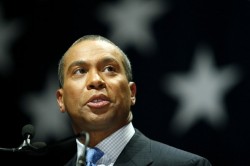 Laws and Policies in Massachusetts

Thanks to Gov. Patrick, a new law has been put into place that “requires insurers to pay for up to 14 days of inpatient care for those in need of acute treatment for addiction and forbids insurers from requiring prior authorization” (Masslive.com). With this bill now a law, it will be harder for insurance companies to turn away individuals who truly need treatment and easier for people who need treatment to receive it. Other requirements included in the law are:

These new requirements under the substance abuse law could go a long way toward helping those in the state find the treatment they need and possibly reduce the amount of substance abuse issues, hospitalizations, and deaths.

The Impact of the Law on a Federal Level

While this is good news for Massachusetts, it could also be great news for the country as a whole. U.S. Sen. Markey has expressed a interest in introducing a bill like Gov. Patrick’s to Congress. According to Masslive.com, Markey says, “When you invest in treatment for patients, in the long run, you save money in re-hospitalization, in readmission to prisons.”

Gov. Patrick even signed the new bill on the same day as a “gathering of some of the nation’s top drug policy officials.” Michael Botticelli, the director of the ONDCP and an attendee of the gathering, spoke well of the efforts in Massachusetts, saying that the state “in terms of the work that has already happened, and by passing the bill today, will continue to promote the good work that’s happening here nationally.”

Although insurance companies will continue to fight legislation of this kind, stating that the 14 days should not be a model for treatment and that “there’s no medical evidence to suggest this is the correct treatment for opioid addiction,” it is still a victory. Yes, it is stated that treatment which “lasts for less than 90 days is of limited effectiveness” (NIDA), but this in no way means that we should not try. Massachusetts is working toward better policies and better care for those who are struggling with substance abuse, and the nation is looking to them as a model for future legislation.