Teenagers often function on little sleep: they wake up early for classes and stay up late every night, sometimes studying, sometimes partying, and sometimes spending hours on the Internet. But the lack of sleep teenagers get is dangerous for them in many ways, especially when it increases the risk of substance abuse. 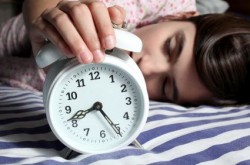 According to a study from the NCBI, teenagers actually “need more sleep because they are in a time of very fast physical, intellectual and emotional growth.” Even though high school begins early and many teens enjoy staying up late, teens actually “need between 9 hours and 10 hours of sleep every day” to function at their best. Many teenagers do not know that they actually need more sleep than adults or children do, and they often wind up getting less than either one.

The Effects of Sleep Deprivation on Teenagers

Steven G Liga, executive director of NCAAD of Middlesex County, states that “chronic lack of sleep can affect mood in significant ways.” Losing sleep or not sleeping enough every night can cause a teenager to feel:

These mood disturbances can be very problematic, but most teens will experience the symptom of being extremely tired all the time. Whether that means falling asleep in class or slugging through the entire day, this can be a real issue. But the effects of a teenagers’ lack of sleep do not end here.

The Link Between Lack of Sleep and Substance Abuse

Teens who go without sleep actually have a higher risk of substance abuse. What’s an adolescent to do when his or her body is begging for sleep, but schedules do not allow it? Unfortunately, many teens combat this by taking stimulants.

Teenagers will often turn to substances like caffeine in order to have the energy to stay out late with friends after being at school all day. Many teens will drink several energy drinks a day in order to stay awake and alert. These products are much more intense than soda and coffee and can be detrimental to a teenager’s health.

Some teens can wind up “too wired from excess caffeine” and “are too on edge to actually sleep even when they want to” according to recent surveys. This causes even bigger problems like abuse of sleeping pills and benzodiazepines such as Valium. Both are commonly used so that the teen can crash and finally get some sleep. Then, he or she might begin taking prescription stimulants like Ritalin to wake up again. Binge-crash patterns like this quickly create addictive habits in those who abuse prescription drugs or other substances.

This pattern is not a surprising one when we consider what effect insomnia has on individuals. Another NCBI study states that “a history of insomnia” can predict “other psychiatric disorders” which include alcohol, drug, and nicotine abuse. Teenagers will usually choose fun over sleep if they can help it, and because their schedules are chock-full, they often turn to drugs to help them through, not realizing the intensity of the issue. Many teenagers begin abusing stimulants and other drugs in an attempt to control their sleep schedules, and this will only lead to further problems. Real changes should be made in the way teens are scheduled in order to help prevent this chronic lack of sleep.