There are both pros and cons associated with the opioid withdrawal process. On the plus side, this means you are taking the right steps toward bettering your life. You understand the importance of beating your addiction, and are willing to go through withdrawal to ensure that you are on the right track.

Conversely, there are a variety of symptoms associated with opioid withdrawal. These occur throughout the process, with many causing discomfort.

In an overall sense, the primary benefit of opioid addiction treatment outweighs the potential drawbacks. Sure, you have to deal with symptoms along the way, but doing so is all part of leading a better life in the future. 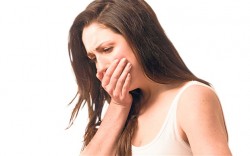 The early stage of opioid withdrawal includes nausea and vomiting.

While not the case with everybody, most people experience three stages of withdrawal. Phase one is known as acute withdrawal, with this typically setting in 12 to 24 hours after your last use. It typically lasts five to seven days, with symptoms reaching their peak around the two to three day mark. Some of the most common symptoms include:

Phase two of withdrawal lasts approximately two weeks. During this time the body is working hard to rid the body of all harmful substances, while also rebalancing endorphin levels. Symptoms during this phase include:

Finally, stage three comes around. This is the longest stage, as it can last as long as two to three months. Fortunately, it is also the least severe in terms of symptoms. During this time, psychological symptoms are more common. These can include:

Dealing with all Three Stages

As you go through opioid withdrawal, you will find yourself faced with many challenges. You will also find that there are ways to deal with every symptom and side effect. For example, staying hydrated, exercising regularly, and sleeping as much as possible are all things that can help you reach your goal of living a clean life in the future.

There is no denying the fact that opioid withdrawal can be uncomfortable and even painful at times. Even so, it is important to remember that this is better than the alternative. Furthermore, you should realize that these symptoms are only temporary, whereas a drug problem can last forever.

The opioid withdrawal timeline is not the same for everybody, but most people find themselves dealing with these three stages at some point.